Philip Glass is an American composer, often said to be one of the most influential composers of the late 20th century. Glass has written works for the musical group which he founded, the Philip Glass Ensemble (with which he still performs on keyboards), as well as operas, musical theater works, ten symphonies, eleven concertos, solo works, chamber music including string quartets and instrumental sonatas, and film scores. Three of his film scores have been nominated for Academy Awards. Glass has performed at The Kitchen since the 1970's and was on The Kitchen's Board of Directors until 2012. Glass is currently the Chairman Emeritus of The Kitchen. For more information, please visit: http://www.philipglass.com/ 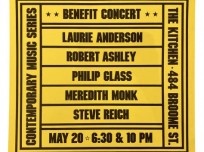