Working in video since the 1970s, Bill Viola has made a significant contribution to the video art form. Since his pioneering early work, shown at The Kitchen in 1977, his videos and installations invoking universal human experiences have gone on to international acclaim, with major exhibitions at the Museum of Modern Art, New York, the National Gallery, London, the Mori Art Museum, Tokyo and the Deutsche Guggenheim. From 1973-1980 he performed with avant-garde composer David Tudor as a member of his Rainforest ensemble, later called Composers Inside Electronics, which performed at The Kitchen numerous times. For more information, please visit: billviola.com 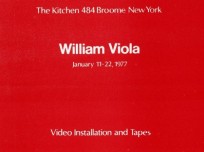