Mitchell Kriegman is a filmmaker, performer, and writer. He began his career performing at the New York Dance Theater, Franklin Furnace, and The Kitchen, frequently performing as Marshall Klugman in comical sketches, many of which made up The Marshall Klugman show on WNET. Kriegman appeared at The Kitchen throughout his career, presenting films and performing with Michael Smith in their shared evening entitled Family Entertainment in 1980. Later on, he started working on children’s classics such as Bear in the Big Big World. He was awarded four Emmy’s for his work in this field. He also wrote screenplays for Columbia Pictures, Universal, and Disney among others. Furthermore, he is the author of several novels, including Being Audrey Hepburn (2014), and his short stories have been published in The New Yorker, Glamour, and more. He now works for the Saturday Night Live team. For more information, please visit http://mitchellkriegman.com/ 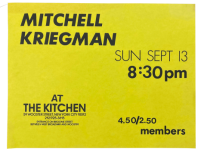