Michel Auder (1945 - ) is a French video and photographic artist who is noted as one of the first video artists. In his exploration of the capabilities of this evolving technology, Auder developed a style of film that continues to be deeply journalistic and biographic, often capturing elements of his life as well as portraying close friends such as Alice Neel, Annie Sprinkle, and Eric Bogosian. Between the years of 1980 and 1988, Auder presented frequently at The Kitchen and premiered several new works including A Couple White Faggots Sitting Around Talking, Video Diary of a Madman, and Chasing the Dragon. 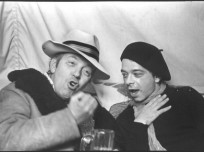