Joan Jonas is a central figure in the performance art movement of the 1960s and in the development of both early formalist and early feminist video. Her work continues to influence multiple contemporary art genres, from performance and video to conceptual art and theater. Jonas has exhibited at The Kitchen throughout her career. Several of her early performances took place at The Kitchen, including Funnel in 1975, and The Juniper Tree (collaborative version) in 1977. Additionally, many of her films were screened in The Video Viewing Room throughout the 70’s and 80’s. Jonas later performed the work Lines in the Sand at The Kitchen in 2004 and was an honoree at The Kitchen’s 2012 gala, along with Steve Reich. More recently, Jonas presented the U.S. premiere of They Come to Us without a Word II at The Kitchen in 2016. For more information please visit: https://gavinbrown.biz/artists/joan_jonas/works 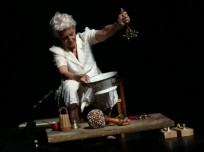 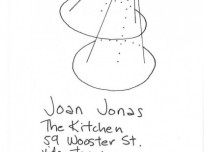