Trisha Brown is an American dancer and choreographer. After training with Anna Halprin in California, Brown moved to New York in the sixties and became involved in Judson Dance Theater. In 1970 Brown founded the Trisha Brown Company to focus on her fluid choreography known for its release, play with gravity, and unconscious movement. She has collaborated with artists Donald Judd, Robert Rauschenberg, and Laurie Anderson among others on both dances and operas. Brown premiered Accumulation with Talking Plus Repertory at The Kitchen in 1997. For more information, please visit: http://www.trishabrowncompany.org/index.php 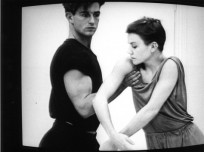