John Lurie (b.1952, Minneapolis, MN) is an American actor, musician, painter, director, and producer. He is associated with avant-garde jazz and No Wave musical movement, which initially drew him to New York in 1974. John and his brother Evan founded the fake jazz band ‘The Lounge Lizards’ in 1978 which proceeded then to involve the artist’s more sophisticated solo composition. That same year he premiered his short film “Hell is With You African Queen” (1978) at The Kitchen’s Filmworks festival. His acting career developed with numerous collaborations with acclaimed director Jim Jarmusch. His independently produced and directed series Fishing with John was added to the Criterion Collection in 1999. Lurie’s painting has been exhibited at P.S.1. Contemporary Art Center in New York, Musee Des Beaux-Arts De Montreal, the Musee d’Art Monderne Grand-Duc Jean in Luxemberg and the Watary Museum of Contemporary Art in Tokyo. His work has recently been acquired for the permanent collection of the Wadsworth Athenaeum in Connecticut and the Museum of Modern Art, New York. 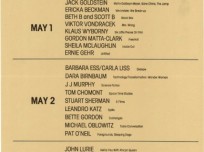