Arthur Russell was a cellist, composer and singer whose music crossed the boundaries of classical, folk and dance music. He was The Kitchen's music director from 1974-75, during which he booked acts such as Henry Flynt, the Modern Lovers and the Talking Heads. He performed at The Kitchen throughout the 1970s and 80s, both with his own compositions and the band The Flying Hearts. Russell died of AIDS at the age of 40 in 1992. 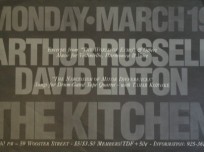