Constance DeJong (b.1950) is an American artist, writer, and playwright. She creates texts that interact with theater, performance, audio, or video works. Her multimedia, language-based pieces and collaborations make performance a natural extension of her writing. Her book “Modern Love," (published in 1977 by Standard Editions) and her poetry collection “The Lucy Amarillo Stories" were both presented at The Kitchen in 1977 with music composed by Philip Glass. In January 1976, during a collaboration between DeJong and Kathy Acker, both artists presented live and pre-recorded works. De Jong also collaborated with Tony Oursler, with whom she performed Relative at The Kitchen in March 1989. 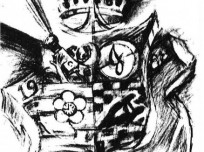