Canadian artist Michael Snow (1929 - ) works across numerous visual and audio media, from painting and sculpture to film and music. Snow is recognized for his experimental approach to film-making, especially in such works as Wavelength (1967), La Région Centrale (1971), and *Corpus Callosum (2002). At The Kitchen's 1980 panel on “Television, Society, and Art” Snow spoke on television's relationship to other reproducible media. 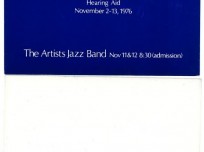