Formed in 1975 by David Byrne, Tina Weymouth, and Chris Frantz, Talking Heads were a critically acclaimed and immeasurably influential rock and roll band which would last until 1991. Over the course of sixteen years, the group's sound expanded from one of stripped-down, nervy proto-punk to incorporate elements of world, funk, and experimental music. Talking Heads were among the first rock groups to perform at The Kitchen and David Byrne has continued to participate in events since the 70's. Additionally, Byrne was honored at The Kitchen's Spring Gala Benefit in 2010. For more information on David Byrne and Talking Heads, please visit: http://www.davidbyrne.com/ 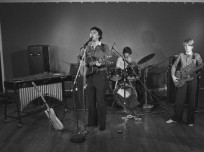