Jon Gibson is a minimalist saxophonist, flautist and composer who was an integral part of Soho's avant-garde music scene. He was one of the founding member of Phillip Glass's ensemble, and performed in works by Steve Reich, Terry Riley, and LaMonte Young. He participated in the New Music, New York musical festival in 1979, and performed frequently at The Kitchen throughout the years. For more information, please visit: http://www.jongibson.net/ 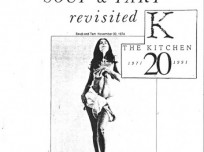