Born in Prague, Czechoslovakia, in 1942, Petr Kotik is a composer, conductor and flutist living in New York City. After studying flute and composition in Prague and Vienna, he performed extensively his own works as well as contemporary experimental music throughout Europe. In 1961, he founded the Musica Viva Pragensis, and in 1966 founded the QUAX Ensemble, both based in Prague. In 1983, Kotik moved to Buffalo, New York, and founded the S.E.M. Ensemble, which presents both chamber and orchestra concerts. He remains the Artistic Director of the S.E.M. Ensemble, now based in New York City. With the S.E.M. Ensemble, Kotik has for many years actively promoted the work of other composers who share a stylistic affinity with his own work, and gave frequent performances as a conductor and performer with the group as well as its larger version, the Orchestra of the S.E.M. Ensemble. In addition to his activities with the Ensemble, he has performed with numerous artists such as John Cage and the Merce Cunningham Dance Company. Kotik and S.E.M. Ensemble have performed at The Kitchen since the early 1970's, and performed Explorations in the Geometry of Thinking and Many Many Women at The Kitchen in the spring of 1982. For more information please visit: http://www.semensemble.org/. 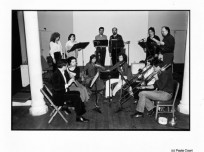