John Driscoll is a composer and sound artist. He is a founding member of Composers Inside Electronics, the group David Tudor formed to perform his seminal electronic sound environment “Rainforest” (later “Rainforest IV”). Driscoll remains central to the continuing life of the piece, which he performed at The Kitchen in 1975 (with Tudor) and again in 2007. With fellow members of Composers Inside Electronics Phil Edelstein and Matt Rogalsky, he created a new iteration of the piece, “Rainforest V,” which is a fully automated version. In his own work, Driscoll often employs robotic instruments, which are programmed instead of played by a live performer. He also experiments with sound’s interaction with architecture and dance. His work was included in The Kitchen’s 2007 group exhibition “Between Thought and Sound: Graphic Notation in Contemporary Music,” and he performed at The Kitchen in 1980 with dancer Douglas Dunn, and again in 1977 with Composers Inside Electronics. For more information, please see: https://musicnow.mills.edu/biography5.php 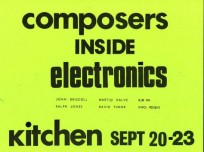 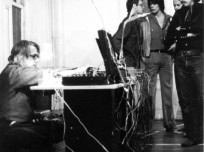