Although he has dipped his hand into countless artistic disciplines, Richard Landry, more commonly referred to as Dickie Landry, is best known as a musician and photographer. Shortly after moving from Louisiana to New York in 1969, Landry became a founding member of the Phillip Glass Ensemble. Throughout his music career as a tenor saxophone player, he collaborated with artists including Paul Simon, Steve Reich, and David Byrne; and has also developed the use of the “quadraphonic delay system”—a technique that allowed him to combine recordings of himself to perform as a quintet. Landry also extensively photographed countless fellow New York-based artists such as Robert Rauschenberg, Walter De Maria and Trisha Brown, and their work from during the 1970s, amassing one of the most thorough documents of New York’s art scene at that time. Landry first performed at The Kitchen in 1974 in an event called “Soup and Tart” organized by Jean Dupuy. For more information, please visit: http://www.dickielandry.com/ 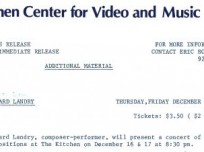