Laurie Spiegel is an American electronic composer who has been producing work since the late 1970's. Among other achievements, Spiegel is known for her use of interactive computer software as a musical production tool -- often using prototype equipment and programs to create her colorful soundscapes. She has referred to the computer as a "sort of Rosetta Stone for the arts" and has worked at the Bell Telephone Labs and Buchla. Spiegel first performed at The Kitchen in October, 1972 and has appeared as recently as 2011 with peers such as Pauline Oliveros and Rhys Chatham. For more information, please visit: http://www.retiary.org/ls/index.html 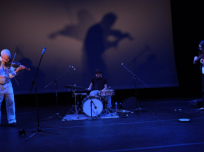