Emmanuel Ghent (1925–2003) was a Canadian-born electronic music composer and psychoanalyst. In the early seventies he worked at Bell Telephone Laboratories and produced electronic music compositions from a speech-synthesizing computer system. He later created pieces combining music with light effects and dance choreographies, performed on many occasions by the Mimi Garrard Dance Company. In parallel to his artistic career, Ghent studied medicine and psychoanalysis, practicing as well as teaching in New York throughout his life. In 1980, Emmanuel Ghent presented five computer music pieces at The Kitchen, in a combined concerts event series with Laurie Spiegel. 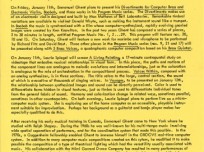