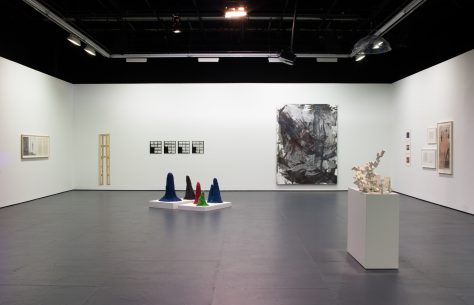 From Minimalism into Algorithm was an exhibition held in The Kitchen’s second-floor gallery space that unfolded in three phases, each consisting of varying groups of artists, which were accompanied by a series of performances throughout the 2016–2017 season. The exhibition sought to rebound the proposition of seriality set forth by minimalist sculpture and composition in the ’60s and early ’70s—and its imbrications with industrial production and individual authorship—into the contemporary, recontextualizing this theme and extracting new valences in light of its resonance with digital technology. From Minimalism into Algorithm proffered not a sequential historical lineage but the trace of an asynchronous, genealogical through-line, counterpoising work from different periods and multiple disciplines, including painting, sculpture, video, performance, and music. Inscribed in its tripartite structure was a process of iteration, the overall arrangement of the exhibition thus mirroring the thematics set forth within the works. The accompanying performance series included works by Robert Ashley and Steve Paxton, Liz Santoro and Pierre Godard, Glenn Branca, DD Dorvillier / human dance corps, Maria Hassabi, Joan Jonas, and American Contemporary Music Ensemble. From Minimalism into Algorithm was curated collectively by The Kitchen’s curatorial team (Katy Dammers, Alessandra Gomez, Tim Griffin, Matthew Lyons, and Lumi Tan) in partnership with the participating artists, who invited others in turn.