New York-based Michael Levenson is a percussionist who studied under Walter Rosenberger and became known in the New York avant-garde music scene of the 1970s. He was very active at The Kitchen in 1972 where he performed percussion for music by Jim Fulkerson and Jim Burton. HIs contributions to The Kitchen's Evening of New Music in October 1972 were "Coke on the Rocks" and "Professor Throwback Presents," musical works which blurred the distinctions between music and performance, sense and nonsense, art and life. 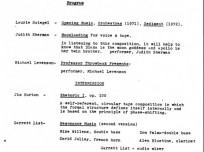