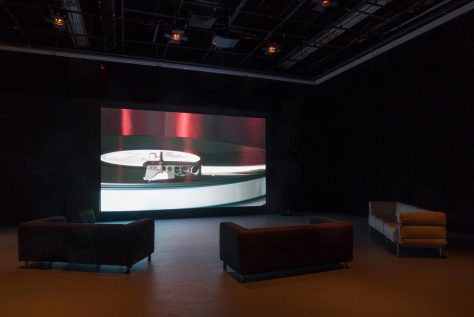 Martin Beck’s Last Night celebrated David Mancuso and the dance parties he DJ’ed throughout the ’70s and ’80s with an installation of a film in The Kitchen’s second-floor gallery. Hosted in Mancuso’s 99 Prince Street home, known as The Loft, the invitation-only parties offered a unique combination of communal atmosphere and high-quality sound without the commercial agenda of later disco-era clubs. Beck’s film reprised thirteen hours of music, played on June 2, 1984, at one of Mancuso’s final loft parties. Prominently featured in the film, the vintage record player’s imbued nostalgia was countered by the lively dance music it played. In the front of the gallery, Beck included two serigraph lists of the songs played and copies of publications related to the project. Although lacking the raucous partygoers of the ’80s, Beck’s installation invited the audience on an intimate sonic journey through the happenings of a particular night at a particular moment in New York City’s history. This exhibition was curated by Tim Griffin.