James Nares (b.1953, London) is a multi-media artist whose interest in the No Wave movement brought him to New York City where he is considered a prominent filmmaker of the genre. Nares’ contributions to The Kitchen include the film “No Japs at My Funeral” (1980) and “Desirium Probe” a performance piece where the artist mimicked regular TV programming while wired with a microphone and remote control, spontaneously changed channels. Nares received his undergraduate degree from the Chelsea School of Art, London, 1973, and his masters from the School of Visual Art, New York, in 1976. He taught painting at New York University in 1994. His recent solo exhibitions include “1976: Films and Other Works” Paul Kasmin Gallery, New York (2012); CineMarfa Film Festival, Marfa, Texas (2012); “Mixed Use, Manhattan: Photography and Related Practices 1970s to the Present” Museo Nacional Centro De Arte Reina Sofie, Madrid (2010); “New Paintings and a Film” Michael Kohn Gallery, Los Angeles (2010). 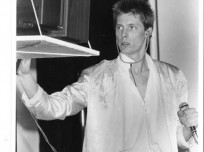