Artist Robert Longo is an American painter and sculptor. He was the film and video curator at The Kitchen from 1977-78 and premiered his early performance works here, as well as had his first New York City solo exhibition, Boys Slow Dance (1979). The Kitchen co-produced his major performance work Empire with the Corcoran Gallery of Art in 1981. For more information, please visit: www.robertlongo.com 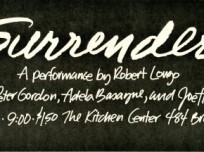