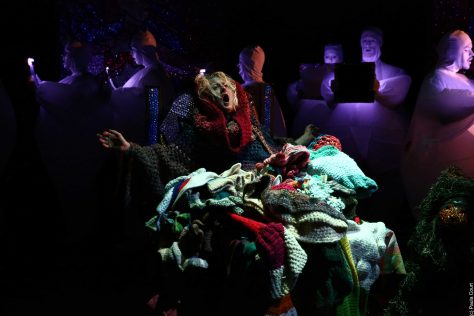 Raúl de Nieves and Colin Self’s allegorical opera The Fool was staged at The Kitchen as an elevated production featuring technicolor sets, elaborate costumes, and a chorus of twenty-two people. The performance explored the story of the archetypal trickster, a character whose disruption of convention serves to educate, liberate, and construct positive social change. True to its namesake, The Fool challenged the semantics of “opera” through a collaborative orchestration of voice, sound, and bodies. The performance featured Colin Self as the Old Woman, Raúl De Nieves as The Fool and the Dog, Alexandra Drewchin as the Child, and Mehron Abdollmohammadi as the Mother. The production was organized by Matthew Lyons.