Gretchen Bender (1951-2004) was a photo, film, and video artist who used her work to experiment with the aesthetic codes of pop culture and the power of the representational image. Bender has been associated with the Pictures Generation artists for her critical appropriation of popular media which she used to comment on cultural image-saturation. Bender's prolific career was not limited to the world of art and included work in back-end production ranging from video-editing to set-design. She is best known for Total Recall (1987) which premiered at The Kitchen in 1987. 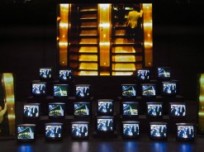