George Kuchar was a video artist and film director acclaimed for his low-budget lo-fi films, frequently made with his twin brother Mike Kuchar. Their work frequently spoofed more traditional Hollywood fare, creating humorous and clever works that explored the human condition. George Kuchar’s first screening at The Kitchen was of his work Video Album No. 1 (1985) as part of the 1988 series Extant Work. Kuchar’s later showed work at The Kitchen in 1990 as part of the 24-Hour George Kuchar Video Marathon. On April 25th-26th, 1998, The Kitchen held Kucharia!, a two-night screening of multiple films by George Kuchar and his brother Mike Kuchar. 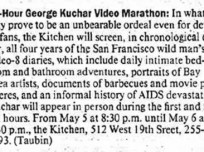