Matt Mullican is a American artist who rose to prominence as a member of the "Pictures Generation." Mullican's work is concerned with systems of knowledge, meaning, language, and signification. Mullican also works with the relationship between perception and reality, between the ability to see something and the ability to represent it. Mullican began performing at The Kitchen in the 1970s. 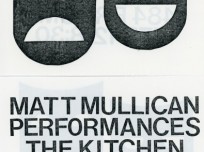