Ed Bowes is a film-writer, director and cinematographer active in New York and abroad since the mid-1970s. Responding to a variety of popular sources from television to modern literature, Bowes orients his work towards audience, awakening in viewers a deeper appreciation of possibilities of vision and of communal experience. In the 70s and 80s, Bowes exhibited numerous of his video-works at The Kitchen, including How to Fly, Romance, Spitting Glass, and Better, Stronger. Bowes was also the videographer for The Kitchen's 1987 TV Special Two Moon July, which featured live recordings of music, dance, visual art, and performance, as well as video art and film. 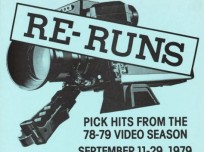