Sherrie Levine (1947- ) is an artist who often uses strategies of appropriation to confront questions of identity and originality in an age dominated by mass media and technological reproduction. Her practice of photographing photographs, most notably in the series After Walker Evans, has placed her in dialogue with pictures generation artists including Cindy Sherman and Richard Prince, as artists who employ techniques of appropriation propagated by Marcel Duchamp and further pursued by Barbara Kruger. Levine participated in two gallery shows at The Kitchen during the beginning of her career, A Picture in 1979 and The Anticipated Ruin in 1985. 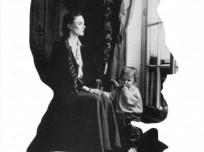