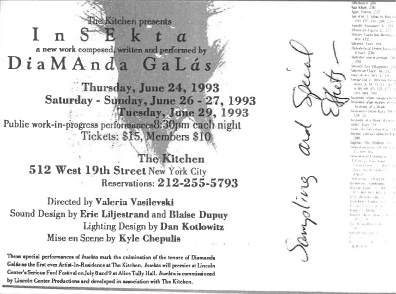 Between June 24 and 29, 1993, composer/performer Diamanda Galas was the inaugural artist-in-residence at The Kitchen. Working in The Kitchen’s second floor performance space, Galas wrote, composed, and performed the work-in-progress InSEkta.

As described in the press release, inSEkta built on the earlier work Vena Cava (1992), which dealt with the subjects of repeated trauma and the mental effects of isolation for individuals who experienced AIDS dementia and clinical depression. In the performance, Galas employed an extreme range of vocal delivery, implementing corrupted speech as a characteristic of jeopardized mental states. Additionally, the performance included live electronic manipulation of Galas’s live and pre-recorded voice as well as non-human vocals and found sounds. InSEkta’s libretto juxtaposed biblical passages with Galas’s own writing.

InSEkta was directed by Valeria Vasilevski and made with the collaboration of sound designers Eric Liljestrand and Blaise Dupuy. Lighting design was by Dan Koltowitz with mise en scene designed by Kyle Chepulis. The performance was commissioned by Lincoln Center Productions, and the completed work premiered at Lincoln Center’s Serious Fun! Festival in July 1993.