Composers Inside Electronics (CIE) was founded in 1973 to realize David Tudor’s electroacoustic environment piece Rainforest IV, which they have continued to perform for over thirty years. The original members included John Driscoll, Paul DeMarinis, Phil Edelstein, Linda Fisher, Ralph Jones, Martin Kalve, David Tudor, and Bill Viola. In 1976, they added new works to their repertory by other members, and were active until 1981. They re-formed in 1996 to complete an installation of Rainforest IV at Judson Church for David Tudor’s memorial service, and have continued to perform that work and others with new members since then. CIE has performed throughout The Kitchen’s history, presenting Rainforest IV in 1975 and 2007, and concerts of additional pieces in 1977 and 1978. For more information please visit: http://composers-inside-electronics.net/cie/cie/cie_home.html 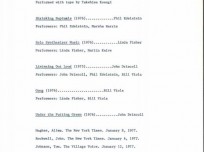