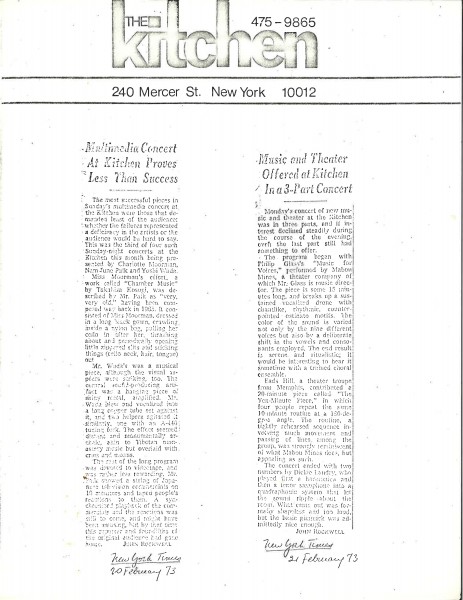 This particular concert was the third of four Sunday-night multimedia concerts at The Kitchen, presented by Charlotte Moorman, Nam June Paik, and Yoshi Wada. It was an instrumental extension of Wada’s work researching the application of the timbre and resonance materials of his compositions. Moorman played Takehisa Kosugi’s composition Chamber Music and simultaneously crawled into a nylon bag with a cello, while dressed in a long black gown, thrashing about and periodically opening zippered the zippered slits to stick out her cello neck, hair, or tongue. Yoshi Wada presented a musical piece, where he blew and vocalized into a long copper tube as an exploration of timbre and resonance in everyday objects. The majority of the program however, was devoted to Nam June Paik’s piece, a ten-monitor video installation of Japanese television commercials and video recordings of people’s reactions to them.