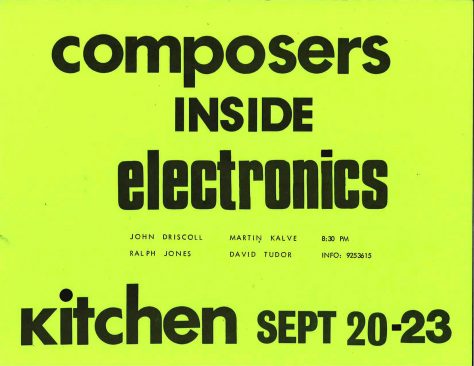 For four consecutive evenings, Composers Inside Electronics—consisting, in this iteration, of John Driscoll, Ralph Jones, Martin Kalve, and David Tudor—presented a single piece each evening conceived by one member and collaboratively realized by the group. Each piece was made with circuitry designed and constructed by the composers, often employing live inputs, such that sounds made by performers or objects would be processed through circuits and then played over speakers in real-time. Another common thread between the four pieces was the use of found objects instead of traditional instruments to make sound, particularly in the final piece, David Tudor’s Forest Speech. Objects such as metal air ducts and plastic cases hung from the ceiling, connected to wires that were routed to four tables each controlled by one of the composers.