Juan Downey was a Chilean artist who was based primarily in New York City throughout his artistic career. Downey initially studied Architecture at the Pontifical Catholic University of Chile, completing his studies in 1961. After this he travelled to Europe where he studied painting in Barcelona and Madrid before settling in Paris, where he trained in printmaking for three years at Stanley William Hayter’s renowned Atelier 17. During this time he met a variety of artists, including the Surrealist painter Matta and Kinetic artist Julio Le Parc, who influenced his later interests in technology and the revolutionary capabilities of art. Downey travelled to Washington D.C. in the United States in 1965, where he began to experiment with electronics, interactive sculptures and performances, and was one of the first artists to begin working with video, for which he would become known as a pioneer. Downey moved to New York City in 1969, where he became involved with the collective RainDance Corporation and its associated video journal Radical Software, which were early exponents of using video as a political and artistic medium. Until his death in 1993, Downey continued to mine the possibilities of technology, communication media, and information systems, while examining issues around anthropology, ecology, and identity through his paintings, performances, videos, installations, and accompanying drawings. Downey is best known for his body of work, “Video Trans Americas” (1973-77), which was shot during Downey’s time in various parts of South America in the mid-1970s, and utilized nonlinear narrative and experimental collage techniques to satirize traditional anthropological approaches to documentary. As part of Return/Jump, a video retrospective curated by Tom Bowes at The Kitchen in 1982, Downey screened “The Laughing Alligator” (1979) from his “Video Trans Americas” series, which interspersed footage from the Amazon jungle with that of New York City to reflect on the contradictory nature of hybrid identities. Downey’s video-performance “Nazca,” which drew attention to the environmentally destructive effects of the construction of the Pan American highway, also took place at The Kitchen in 1974. For this performance, Downey traced the outline of a bird-shaped geoglyph, which was then obscured by the residues of white chalk from the shoes and faces of two performers, Carmen Beuchat and Suzanne Harris, as he lay still at the traced bird’s center. 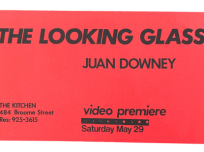