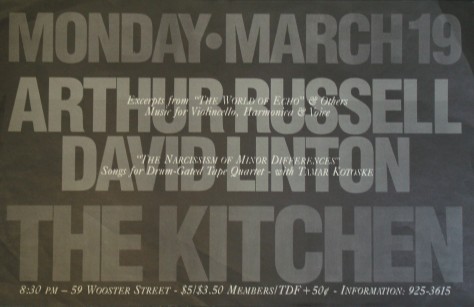 For a single evening, Arthur Russell presented three pieces performed on violoncello, harmonica, and vocals, and David Linton presented four pieces, including the premiere of N.O.M.D. (The Narcissism of Minor Differences), created in collaboration with choreographer Tamar Kotoske. In Linton’s headlining piece, live drumming initiated a layered sequence of pre-recorded tape tracks “toward the shaping of songs normally associated with the band context.” The work gestured to Linton’s involvement with the New York downtown music scene and was set in dialogue with Russell’s shared engagement with experimental composition, as well as more popular forms such as disco and folk.