Julius Eastman was a composer, performer, and vocalist remembered for his captivating performances and minimalist and post-minimalist compositions. After studying piano and composition at the Curtis Institute of Music in Philadelphia Eastman became part of the Creative Associates, the University of Buffalo, New York based group founded by conductor Lukas Foss. Working in conjunction with colleagues including Petr Kotik, Gwendolin Sims, Morton Feldman, and others he created a number of works including works for voice, multiple instruments, and dance. Eastman first performed at The Kitchen in 1972 as part of the s.e.m. ensemble, and later moved to the city in 1976. Quickly enmeshed in The Kitchen's community and that of the downtown music scene more broadly he went on to perform here many times throughout his career, premiering new works and collaborating with artists including Meredith Monk, Arthur Russell, Andy de Groat, Jeffrey Lohn, and others. During this period he was also part of the Brooklyn Philharmonia and the CETA Orchestra, performing in a wide range of venues from Carnegie Hall and the Brooklyn Academy of Music to downtown lofts and disco clubs. Eastman died in relative obscurity in 1990 but the past few years have seen a resurgence of interest in his work. In 2016 a presentation of his piece "The Holy Presence of Joan d'Arc" was performed by ACME as part of "From Minimalism into Algorithm." 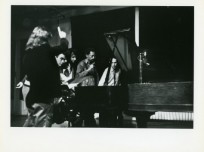