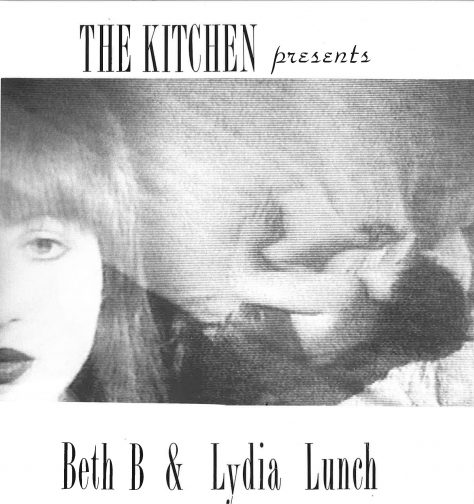 This shared evening included the presentation of a number of videos directed by the No Wave, underground filmmaker Beth B that explored themes around violence, sex and the conditions of contemporary society, including “American Nightmare” and “Belladonna”, which she co-directed with the artist Ida Applebroog. Beth B also premiered her collaborative work “Thanatopsis” (previously titled “Annie Get Your Gun” created with Lydia Lunch. This short video, written and performed by  Lydia Lunch and directed by Beth B, set a despondent, noirish tone to ruminate upon women’s resilience in the face of the destructive power of men. As part of the event Lunch also performed her seminal spoken word LP “Conspiracy of Women,” which had been released the previous year. A damning tirade of the patriarchal imbalances in society “Conspiracy of Women” acted as a manifesto that was both articulate and abrasive, confrontational and empowering.