Group Material, an artists’ collective that revolutionized contemporary methods of curation, presented an exhibit titled Arts and Leisure at The Kitchen in 1986. As an organization, Group Material curated visual arts events around political and cultural themes, often bringing in work that was considered too commercial to be art or displaying work in ways that challenged the aesthetics expected of gallery spaces. Seemingly unrelated artists or artworks were put in conversation with one another in order to provoke connections or associations, with the ultimate goal of challenging what art is, who art is for, and why art is important. During its nearly twenty years of activity between 1979 and 1996, Group Material focused especially on creating exhibits that discussed politically and socially charged issues such as US foreign policy and the AIDS epidemic. 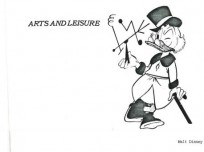