Robbie McCauley is a playwright, performer, and director who became involved in theater in the 1960s with the Negro Ensemble Company in New York. Born in Virginia and growing up across the south, her work was inspired by personal experiences with race especially as they related to gender and family history. At The Kitchen, she wrote and performed in three original works: Indian Blood, Sally's Rape (which won a Bessie Award in 1990 and an OBIE Award in 1992 for Best New American Play), and Race in Americas - North/South. She collaborated with several other artists, such as Thea Martinez and Frank Holland, both in and outside of The Kitchen. Meant to conjure up the unmentionable, McCauleys work often employed live performance, projections, song, and overlapping narratives of past and present. Most recently, McCauley wrote and performed in a play called Sugar that explored her life with diabetes. For more information please visit: http://robbiemccauleyncompany.com/ 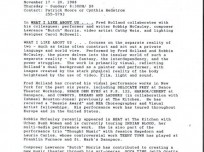