Jeannie Hutchins is a choreographer, writer, and visual artist who combines multiple forms in her performance. In 1977, she joined Ping Chong's Fiji Theater Company of which she remained a member for over a decade (she won a Bessie Award in 1986 for her work with them). Hutchins was in an original production of Meredith Monk's Quarry in 1976 as well as the Robert Wilson/Philip Glass opera Einstein on the Beach. In addition to her performances at The Kitchen, Hutchins was also featured in both group and original work at LaMaMa and PS 122. 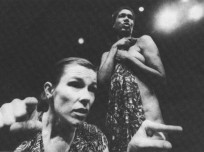