Winner of the 1995 New York Foundation for the Arts award for poetry, Thea Martinez performed at The Kitchen with Robbie McCauley in a conversation on social relations entitled Race in the Americas - North/South. She was affiliated with the Bronx Council on the Arts Writers Corps Program and developed a magazine called Stepping Up which published the writings of recovering addicts. Her writing was performed at the Public Theatre, PS 122, and The Performing Garage in addition to several colleges and public schools. Martinez was also a dancer, dance teacher, and performer with the company Teatro Vida. 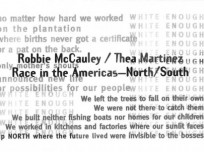