Jawole Willa Jo Zollar is a performer whose art is strongly rooted in her training and relationship with sacred and secular aspects of African-American culture. Zollar studied under Katherine Dunham and at the University of Missouri (BA) and Florida State University (MFA) before moving to New York City. After training for a few years under Dianne McIntyre, Zollar formed her own music and dance ensemble called Urban Bush Women. With work strongly focused on issues of race, gender, social conventions, and the intersections of all three, Zollar went on to receive two Inter-Arts grants and three Choreographer's Fellowships from the National Endowment for the Arts. Her company has toured extensively throughout the United States and Europe. 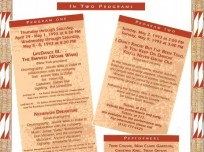