Elizabeth Amelia "Lisa" Fox was born August 29, 1950 in Elizabeth, New Jersey. Fox attended Acalanes High School in Lafayette, California, and graduated from the David and Marni Wood Dance Program at UC Berkeley in 1974. After graduation she joined the Margaret Jenkins Dance Company before joining the Merce Cunningham Company, where she was a lead dancer from 1976 to 1980. Fox received critical acclaim for her dancing in 1978 Cunningham productions Fractions and Summerspace. Her choreographic work included the production of Floored at The Kitchen, a collaboration with sculptor Margaret Cogswell. In 1987 The Whitney featured a joint exhibition of Fox's and her former husband Curtis Royson's work. Fox died of cancer in Santa Cruz, California in 2001. 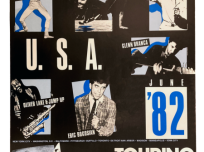 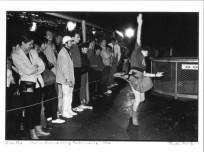