Peter Van Riper, a sound and light environment artist and musician, was a worldwide collaborator and pioneer of laser art and holography. He, along with artist Gerry Pethick and laser physicist Lloyd Cross formed the first company dealing with holographic art. Van Riper composed music which increasingly drew from nature and world music traditions including Japan and Indonesia. Simone Forti and Peter Van Riper performed Home Base together at The Kitchen in 1979, with Forti dancing and Van Riper playing music. 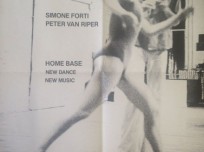