Born in 1938, Dick Higgins was a British composer, poet, printmaker, and early Fluxus artist. Higgins studied composition with John Cage at the New School of Social Research in New York in the late 1950s. He later took part in the Wiesbaden, Germany Fluxus festival in 1962 that marked the founding of Fluxus activity. He founded Something Else Press in 1963, which published many important texts including Gertrude Stein, Marshall McLuhan, John Cage, Merce Cunningham, as well as his contemporaries such as artists Allan Kaprow, Claes Oldenburg, and Wolf Vostell among others. Higgins coined the word intermedia to describe his artistic activities, which described the interdisciplinary activities that became prevalent in the 1960s. Higgins performed his own work in a split bill with Jackson MacLow at The Kitchen in the fall of 1980. For more information please visit http://www.fluxus.org/classic/higgins.html. 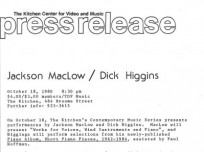