La Monte Young is an American composer known for his development of durational composition. His works are focused on sound frequency ratios, intonation, and a rational number based tuning system. The use of improvisation in Young’s works also contributes to his experimental and minimalist style. In 1952 Young formed The Theatre of Eternal Music group, often associated with drone and noise music. In the 1960s he began to work with lighting designer, artist, and musician, Marian Zazeela who became his partner and wife. The couple performed shows at The Kitchen such as The Preview of the New LP Recording (1971) and Dream House (1974). In the early 1990s Young toured with his Forever Bad Blues Band and performed at The Kitchen in a show called Young’s Dorian Blues in G (1993). 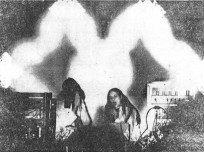