Dana Reitz is a choreographer, dancer and visual artist who has developed and produced projects since 1973. Most of these works have been performed in silence to reveal the movement's own musicality. Since the early 1980’s, she has created scores that weave movement and light and has collaborated with lighting artists Beverly Emmons, James Turrell, David Finn, Richard Martin, and, extensively, Jennifer Tipton. Reitz has presented several works at The Kitchen including Journey for Two Sides (1978), Quintet Project (1982), Circumstantial Evidence (1987) and Necessary Weather (1994). She is the recipient of two New York Dance and Performance (“Bessie”) Awards, one of which she received for Circumstantial Evidence. 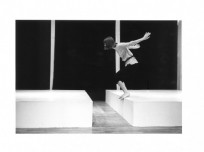