Carlota Schoolman was a video artist and producer central to the New York art world from the 1970s onwards. A collaborator of Richard Serra, in 1973 the two created their watershed piece Television Delivers People, a seven-minute, single-channel video that presents a list of statements outlining the televisual strategies used by corporate advertisers to extend social control. The piece was later produced by The Kitchen in 1975, and shown again in 2016 as part of the group exhibition “From Minimalism into Algorithm.” In 1986 Schoolman produced Two Moon July, a video directed by Tom Bowes on occasion of The Kitchen’s 15th anniversary, which splices clips of past work from artists such as David Byrne and Laurie Anderson with performances set in a stage built by Brian Eno, Cindy Sherman, and others. It aired as a one-hour special on PBS in the fall of 1987, and Schoolman’s work remains integral to understanding topographies of the New York avant-garde. Schoolman did programming for the famed series Experiments in Art and Technology (E.A.T.) before becoming the Video Program Director at The Kitchen in 1974. During her time she curated a series of single-channel works and video installations--the first regularly scheduled daytime video exhibitions in New York. 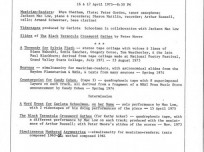