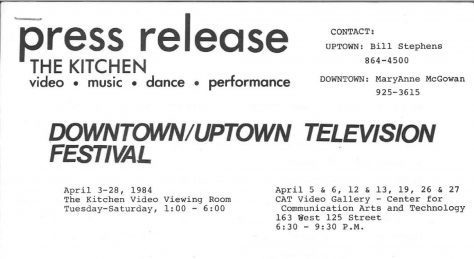 From April 3–28, 1984, The Kitchen and CAT Video Gallery--Center for Communication Arts and Technology presented free showings of work by independent television producers and video artists. The Downtown/Uptown Television Festival intended to create an open dialogue and discussion between artists working downtown/uptown through shared presentation of work and organized talks between artists from these distinct areas. Every week during the month of the festival, screenings, discussions, and performances were curated around a specific theme: week one was video music, from Soul/Reggae to TV Commercial to New Wave Rock; week two was video art from computer imagery to video interpreted dance; week three was avant-garde video performance art, during which there were live performances featuring dancers, musicians, video and visual artists, and poets presented in collaboration with Just Above Midtown/Downtown Gallery; and week four was the educational, dramatic, and documentary program, from soap opera to variety shows to political struggles.