Matthew Geller is an American artist whose work spans the genres of sculpture and public art installation to video art. Before 1980, Geller primarily worked as a sculptor before transitioning into video art. His videos rework the structure and style of traditional television storytelling, playing with conventional genres including documentary, fairytale, and melodrama, and injecting elements of fragmentation and disjunction to disrupt expected narrative patterns. In 1990, Geller’s focus on video culminated in the solo show, From Receiver to Remote Control: The TV Set, at the New Museum. Since then, Geller has revisited sculpture, installing playful public art installations from swings to showers to foster a sense of community in underutilized environments. Geller has presented video work at The Kitchen thrice: once in 1980 as a part of “True Cross Fire,” again in 1984 as a part of the Downtown/Uptown Television Festival, and in 1985 as a part of “Everglades City.” For more information, visit https://matthewgeller.com/. 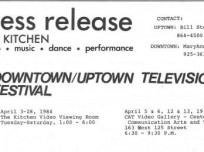