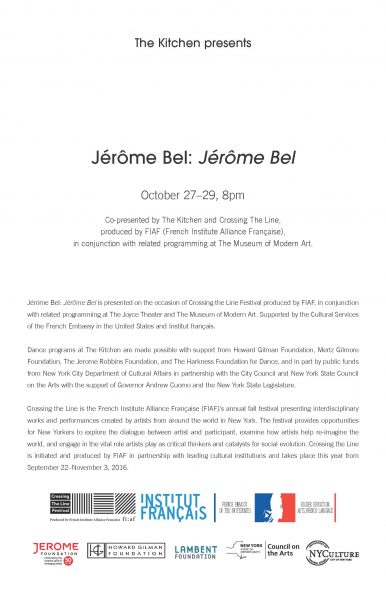 Jérôme Bel was presented at The Kitchen as part of Crossing the Line Festival produced by the French Institute Alliance, in conjunction with other presentations of Bel’s work, including The Show Must Go On from 2001 at The Joyce Theater and the premiere of MoMA Dance Company at The Museum of Modern Art. Jérôme Bel premiered in 1995 at Théâtre de la Bastille in Paris, and approached the body, light, and music in their most literal sense. Jérôme Bel was described by Alain Buffard in 1999 as “a minimalist manifesto applied to dance.” The work’s four dancers, naked for most of the fifty-minute work, used their bodies to evoke both philosophical and humorous themes. One performer illuminated the work with a bare light bulb while another recited a quietly sung rendition of Bach’s Goldberg Variations. The final two performers chewed their fingernails, dipped their hands in urine, and wrote on each other with red lipstick as they explored their bodies as incongruous and strange. As they stretched their flesh and contorted their bodies, the couple provoked a meditation on identity, language, and the absurdity of bodies. Jérôme Bel at The Kitchen featured performances by Claire Haenni, Michèle Bargues, Eric Affergan, Yaïr Barelli, and Frédéric Seguette.